Garfield Boys Basketball will begin their season against Bishop Blanchet on Nov. 30 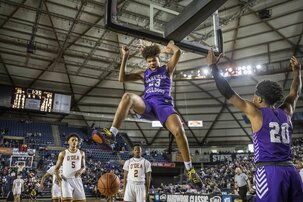 ​The Garfield Boys Basketball team had another wildly successful year ending in their second State Championship in the last three years in a game that was expected to be close, but was a 69-44 blowout vs O'Dea. Forward Tari Eason led the way with 21 points and 14 rebounds along with Sophomore guard Koren Johnson who poured in 16 points. Garfield was able to contain O'Dea's Junior sensation Paolo Banchero, who was held to just 16 points shooting 5-13. ​

Beginning the week of March 1st, eight Garfield sports will start their seasons as a part of the Metro League’s first of two seasons.
​​
​Click to read full story