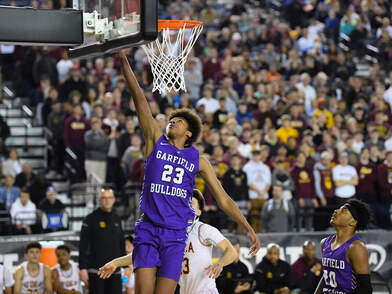 Photo by Cooper Clark
Jack Jassy
The Garfield Boys Basketball team had another wildly successful year, ending in their second State Championship in the last three years in a game that was expected to be close, but was a 69-44 blowout vs O'Dea. Forward Tari Eason led the way with 21 points and 14 rebounds along with Sophomore guard Koren Johnson who poured in 16 points. Garfield was able to contain O'Dea's Junior sensation Paolo Banchero, who was held to just 16 points shooting 5-13.

The prospect of facing O'Dea in the State Championship couldn't have inspired confidence that Garfield would emerge as champions as O'Dea won both of their previous two meetings (with one being close and the other a 20 point loss for the Bulldogs). In the first two meetings, the Bulldogs had significant trouble stopping O'Dea's offense as they scored 76 and 64 points.

While it wasn't obvious Garfield would make it to the State Championship, there was always hope because Eastside Catholic(second nationally ranked team Garfield beat next to O'Dea) had beaten O'Dea all three times they faced O'Dea. Similar to O'Dea, Garfield met Eastside Catholic three different times this season, but the Bulldogs had their number winning all three times. January 31st, Koren Johnson scored a career high 34 points to lead the bulldogs to a 83-73 win in their first meeting. On February 14th, no love was shared between these two teams in their second battle as the Metro League Championship was on the line, in which Tari Eason was able to make a buzzer beater tip-in to win 65-64.

One key reason for the Bulldogs success was the outstanding play from Senior forwards Tari Eason and Kendall Munson. Senior Tari Eason had offers from schools including USC, Colorado, and Cincinnati which he ultimately chose Cincinnati. Eason had spent his first two years of high school at Garfield before transferring for one year to Federal Way high school. The Federal Way team featured former Washington Huskies forward Jaden McDaniels, and the team went 26-3 in the season. Garfield's other senior starting forward Kendall Munson also had significant college interest with offers from Pepperdine, Washington, Washington State, and Montana. Kendall Munson committed to Pepperdine in early October rated as the third best player in Washington according to 247 sports.

The 2020-21 year will be a new chapter for Garfield basketball, but they won't be starting over as Sophomore and Freshman guards Koren Johnson and Jaylin Stewart will be back. Koren Johnson had a good freshman year, but in his sophomore year he achieved things most high school players don't achieve till later on. First off, getting his first D1 offer from San Diego, but also getting more from Montana, Washington, Arizona, Pepperdine, Washington State and Loyola Marymount. Also, scoring a career high 34 points against a nationally ranked team in Eastside Catholic in the regular season then scoring 22 again against Eastside Catholic in the State Semifinals. Finally, freshman guard Jaylin Stewart made a splash on this team from the start of the season all the way till the end. In the 'lolani Classic in Hawaii, Stewart averaged 9 ppg and for the state tournament Stewart averaged 12.3 ppg. In the Metro League Championship, Jaylin Stewart made a three pointer giving the Bulldogs the lead with under one minute remaining and got the Bulldogs back into a position to control the game. Jaylin Stewart also already has an offer from Washington, Montana, and Arizona. Both Koren Johnson and Jaylin Stewart are very valuable pieces to this team and are the future of this Garfield Bulldogs basketball team.