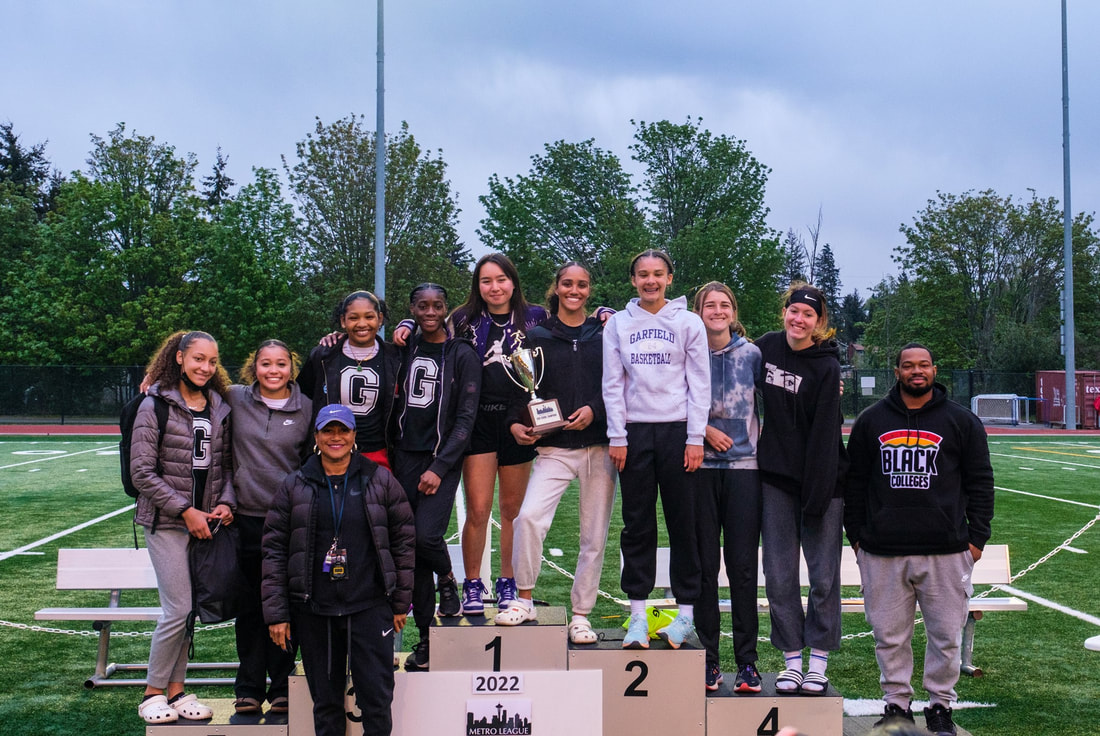 The lady Bulldogs are Metro Champions! After stunning performances all around, the Girls Track and Field team placed 1st in the Metro league, winning 118 points and finishing an impressive 18 points ahead of any other school. The Boys Track and Field team, despite a few challenges, managed to place 4th with 64.25 points. The Bulldogs are blazing their way toward State, with at least 20 athletes qualified for Districts.

Metros happened in two stages this week. On Wednesday were the preliminaries, consisting of the top 24 athletes in each event competing in three evenly distributed heats. The top 8 athletes in each event automatically qualified for Districts and advanced to the Metro finals on Friday. The only exceptions were the 1600m and 3200m distance events and all field events. These were only held on one day, and the top 8 not only advanced, but also placed in the metro championship. The top performer in each of these events was the Metro champion. For all events excluding long-distance and field, Metro league finals were on Friday.

In the 4x200, the first event of Finals in the battle for the Metro Championship, the girls showed a strong performance, but with a different lineup that usual. Facing some difficult competition, the team placed 3rd, with a total time of 1:46.88, less than a second behind Seattle Prep and West Seattle. However, neither team was able to trump Garfield’s time from April 28th, and Garfield still had the best time in the state.

Both Finn Albright and Tayden Blue represented Garfield in the Men’s 110m Hurdle final, scoring some points for the boy’s team, and placing 4th and 6th respectively. Neither were able to PR, but both will have another shot next week at Districts. Dyanni Manago succeeded in the preliminary round of the Women’s 100m Hurdles, posting a PR with a time of 17.89s, but was not able to continue this momentum into the finals, falling to 8th place.

The Men’s 100m dash was set to be a Bulldog showdown, as Tawaf Aboudou and Jacolby Cochran Jr posted precisely the same time in the preliminary round. Cochran barely bested Aboudou in the final, with 11.41s, to Aboudou’s 11.44. They placed 4th and 5th. The Lady Bulldogs hit their stride during the Women’s 100m. The final was a showcase of Bulldog excellence, with four of the top eight athletes wearing purple. Even though Bulldog Shima True had to run back and forth between triple jumping and the 100m dash, she still managed to get a PR in the 100m with a time of 12.75s and placed 3rd.  Takiyah Blue placed 2nd, just behind Blanchet’s Hannah Kahn, whom she had bested in the prelims. Mylea Lexing and Lucy Richardson placed 5th and 7th respectively.

The Men’s 4x100 went poorly for our Garfield athletes. The Bulldog’s started off strong, and everything was smooth in the hand-off between Kenny Gilbert and Jacolby Cochran Jr. However, when Cochran was finishing dashing down the straight-away, and attempting to pass the baton to Jason Finley, they fumbled, and the baton was dropped. The athletes dropped to the ground in disappointment and frustration, but Aboudou picked up the baton and finished the relay with pride. The team still finished quicker than Blanchet, who also had a baton drop. Against another round of tough competition, the Women’s 4x100 team raced to a season best of 50.74s and 3rd place.

The Bulldogs made up for some of the slower finishes early in the competition, reasserting their dominance in the 400m. In the Men’s 400m final, Tawaf Aboudou ran a quick 50 second 400. He showcased his strategic expertise, starting off conservatively, but then accelerating in the last 150m to a second-place finish and a nearly two second PR. As usual, the Bulldogs dominated in the Women’s 400, leaving no room for any competition, and coming in 1st, 2nd, and 3rd. After an unfortunate preliminary race, Takiyah Blue dominated in the final, finishing with a new PR of 58.42s. Malia Samuels placed 3rd and was just 4/100 of a second away from breaking a minute.

Garfield again proved dominant in the 300m Hurdles, with three athletes in the Men’s final, Finn Albright, Tayden Blue, and Phinneas Woodland, all having strong performances and placing 2nd, 5th and 6th. Three of the eight competitors in the Women’s 300m Hurdle final were also from Garfield. Fiona Real, Mae Robinson, and Anya Ceballos-Baliga placed 2nd, 3rd, and 8th.

The Men’s 800 was a difficult race for Garfield. Although easily qualifying for Districts in the preliminary, Nichols injured his hamstring badly. However, because it occurred so shortly before the final, he still had to race. The pain was immediate, and he had to limp his way through the entire race, his bandage falling to his knee during the second lap. It was a difficult day for him, but hopefully he will recover enough to have a strong performance at Districts.
Jacolby Cochran Jr represented Garfield in the Men’s 200m dash final, placing 7th with a time of 23.98s. In the Women’s 200m dash, Garfield again was on top, with Takiyah Blue in 1st, far ahead of the competition with a time of 25.65s. Lucy Richardson and Mylea Lexing placed 4th and 5th with times of 26.43 and 26.52s. This puts all three of them as top runners in the state.

The Men’s 4x400 was a strong showing for Garfield. The Bulldog’s were in a steady 2nd place, but in the final 100m, they were overtaken by Lakeside and O’Dea, putting them in 4th with a season best of 3:33.51s.  However, following this was perhaps the most astonishing performance of the day: the Women’s 4x400. The Bulldogs raced a stacked team of Lucy Richardson, Malia Samuels, Jayda Lewis, and Takiyah Blue. Despite starting in an outer lane, Richardson put Garfield in an early lead in the first 200 meters.  From then on, the rest of Garfield’s runners continued to widen the gap, putting repeatedly putting Garfield further ahead.  The Girl’s team goal was to finish in under 4 minutes. There goal was reached by an impossibly slim margin, with Takiyah Blue finishing the relay in 3:59.95. This put Garfield as #1 in State, finishing 8 seconds ahead of the 2nd place finisher in the race, and 4 seconds ahead of the closest competition in the entire state.

The Bulldogs also found success in the field events. In the Triple Jump, Shima True placed 2nd despite scratching two of her jumps in the final, with her best jump being 35 feet and 10 inches. Debo Wright was the top performer in the Men’s Shotput with a throw of 39 feet and 9 inches. In the Men’s pole vault, Mahyar Mohajeri had an astonishing vault of 10 feet and 6 inches, placing 7th and qualifying for districts. He says that it has been “a long journey.” To make it this far with his pole vaulting. Despite just starting this year, he is the premiere pole vaulter for Garfield. Wren McIntosh also had a great performance in the Girls Pole Vault, going 9 feet and placing 5th.
​
Overall, it was a strong showing for the Bulldogs. They now prepare for another strong showing at Districts.