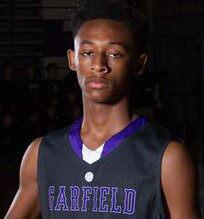 Tremaine Guidry is a 6'0 point guard for Garfield. After two years of coming off the bench, Guidry has stepped into a starting role in his junior year and he shares his thoughts on the early part of the season with us.
How did you get into basketball?

“I started playing basketball I think around kindergarten. I played for [Seattle] Rotary, it was an in-house league. Fourth grade was when it was really serious, we had a tryout and all that. I’ve been playing for rotary from fourth grade until now”.

“It’s pretty good there. I love the coaches, the coaches are cool, also my friends are there and even playing against other teams. The players, just playing with them is great”.

How do you feel like the season has been so far?

“It’s good, its a lot different though. At Garfield we are used to having packed crowds, the crowds are a lot quieter so as a team we have to make our own energy but it’s good. I’m glad we’re playing”.

Without the crowd is it harder to have energy as a team?

“Last year and other years we usually have a speaker in the locker room but now we can’t use the locker room so everyone just has headphones in to get themselves locked in and do what they got to do. We still do the same thing it’s just individually now”.

How would you say your game has improved from last year to this year? What did you focus on in your time off this past year?

“The main thing I focused on was confidence. Confidence is a big key, that’s one thing I kinda short on, sometimes I was a little timid when I was shooting the ball or doing something that I had to do, but now I’m more engaged, I’m a lot more confident”.

“Coach Brandon, he’s a good dude, I love coach Brandon. He tries to get the best out of everybody, he’s pushing you hard and he’s trying to get you to where you want to go. I think that’s his biggest goal for him as a coach”.

Is there a specific part of the game he focuses on for the team?

“He mainly wants us to play hard, that’s the biggest thing, and another thing is he don’t want us playing if we’re not having fun”.

What have the early stages of recruitment been like?

“Recruitment, it’s not where I want it to be but I did get a few letters from a couple schools. I’m waiting for an offer to come in, so I’m just working to get an offer”.

How will you guys approach the big game against O’Dea coming up? Any things you are focusing on for this matchup?

“I think we all want to redeem ourselves from when we played them in the first game, and we want to just do the same thing we did in the state championship last year. The biggest thing is defense. If we can stop them from scoring - which our team is pretty good at - our defense is a big thing that separates us from other teams, so our defense is going to be the big thing for this game”.