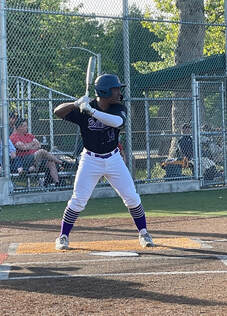 Louis Simon is a junior catcher for the Garfield baseball team.  After playing on JVC his freshman year and not having a season last year, Louis has thrived in his starting role hitting .333 with 13 hits and 11 RBI's.  Louis told us about his season and his baseball experience at Garfield High School. ​

​
How do you feel about this team going into the playoffs? What will the team focus on in trying to prepare?

I think that our team has a pretty good outlook on the playoffs. Right now, our pitching performance is coming in really well and especially as you can see from Aaron (Herst)’s last outing with the one-hitter. And I’d say we’ve focused mainly on our hitting. Our hitting has been decent. We’ve been getting enough hits to get runs across but not enough to beat the top-tier teams in our league. So, just working on contact hitting and working on getting runners on and in.

If you do play O’Dea again in the playoffs, how will you try to replicate your win from last time you faced off?

Again, we need to focus more on hitting. The pitching performance was good that game even with all the [11] runs given up. But, I don’t think we did too well on the hitting category; I think it was just a lot of errors from O’Dea. And going on, we can’t count on errors to win games against them [O’Dea], we have to actually bring our best.

How have you been able to play well this year on varsity and move up in the lineup to being one of the best players?

It’s a lot of hitting constantly. I played for a select team outside of Garfield. Pretty much every other day we are at practice hitting or taking some reps behind the plate. It’s just always constantly improve and adding on to your game.

What was the schedule like for your select team during the pandemic?

Our team wasn’t allowed to play games in Washington during the pandemic because we were in phase 2 so they didn’t allow any play. What my team did was we went down to Idaho for a couple of tournaments. We still had a lot of practices to make up for the missing games.

What’s been your favorite moment of the season so far?

My favorite game would probably be against Roosevelt, not just because we [mercy-ruled] them, but also because our pitching performance was really good, especially Colin [Bryant], and also my hitting was really good.

What’s the energy like on the team during games?

You can definitely tell that we bring the energy, we play a lot better, we get more hits and our defense is stellar. When that energy starts to drop you can tell that we just are not bringing the same energy and start to slip up a bit. One key is that we just have to keep the energy up for the rest of the season and make sure we can fight through these hard matchups.

My plan for the future is to hopefully go play for a division one college and stay there for my full four years and then taking my journey on to the majors. Hopefully, I can make it all the way, not just to minor league ball.

Do you feel like this season for Garfield has been a success? If not, what would make it a success?

Right now I would say it’s a success due to the current circumstances and COVID, a lot of people on the team weren’t able to get too much work in during the offseason, so I’d say how we are performing now is a lot better than I expected.