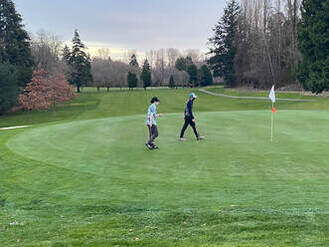 Photo by Krit Hiranphanit
Jack Jassy
Garfield Golf’s first match is in the books as part of the opening day of high school athletics, and the first sports event since last year.

The match ended in a 128-81 loss that lasted until sunset. The golf team was short of players as a bus that was supposed to take the team to the game never arrived. Six players were able to make it to the match though just as it was getting underway. Most matches, teams have eight players in which six players get scored but with the Bulldogs only having six players, there was less margin for error. Players that participated in the match were Griffin Thoreson, Jack Theiss, Ian Wiltamuth, Jack Jassy, Will Nielsen, and Hudson Mckinney.

Although there was trouble getting to the match, the event was able to be played through its full duration. O’Dea’s leaders in points were Dalton with 27 and Brady with 23. Of the six players scored, all but one scored 20 or above points (round of 44 or better). On the other side of the tee, Garfield started well with Griffin Thoreson two over par after four holes as well as Ian Wiltamuth and Will Nielsen’s pars on the third hole. Toward the end of the match, Jack Theiss and Jack Jassy poured in a slew of pars and bogeys to cap off their rounds, but it wasn’t enough to keep up with O’Dea. To keep up, Garfield would've had to have four players score over twenty points, which didn’t happen. Griffin Thoreson and Jack Theiss broke the mark, putting up 21 and 20 points, while the rest of the team wagered under 15.

Up next, Garfield looks for their first win of the season against Cleveland on March 9th. In their only meeting last year Garfield won 110-18, so the team will look to replicate that effort.